Panama as part of the group of countries with more dynamic developing economies represents in the American Continent for China, in terms of economic relationship, an opportunity to project their geostrategic interests on maritime trade, an issue that begins to be glimpsed with the beginning of diplomatic relations between China and Panama, from June 13, 2017, with the signing of the Chinese-Panamanian commitment (establishment of diplomatic relations) by the Minister of Foreign Affairs of China, the Vice President and Chancellor of Panama, which should contribute to the bilateral cooperation in various matters, such as: maritime affairs in all their aspects.

On the other hand, one of the pillars of China's geostrategic strategy is the so-called new silk route, which involves reformulating the Asian geopolitical approach and consolidating China's global influence. In this ambitious megaproject of extraordinary proportions the maritime sector plays a key role, through large investments and infrastructure, ports, railways, gas pipelines that seek to integrate the entire Asia-Pacific, with China as the central axis, to the rest of the world.

The aspiration to broaden the historical links in development and consolidation must be specifically aimed at the mutual benefit of the maritime and logistic connectivity that has a strategic relevance for the economic development of both countries, without neglecting the sustainable development of the economy of both States in relation to the different modes of maritime transport, whose economies of scale minimize the costs, maximize the prices, generate added value and optimize the value chain's usefulness. It is what prompted both nations to sign an agreement to establish preferential rates for Panamanian-flagged ships in the ports of the People's Republic of China, as the most favored nation.

The concept of “The most favored nation”, in the maritime-port terms focuses on the payment of port rates for the vessels coming to the determined ports, making the difference between “preferential rates” and “general rates”. The vessels registered in mentioned countries will have the privilege to pay the minor port rates as those paid in countries not qualified as “The most favored nation”. 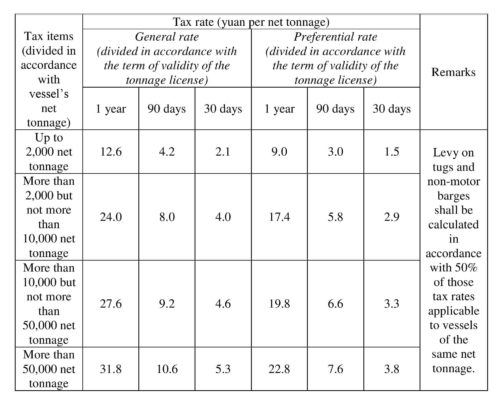 In case of Panama, the Agreement on Maritime Cooperation entered in force the 1th July 2018; contemplate that all the Panama flag vessels, which enter the China’s ports, will receive the benefit to pay the minor port taxes as paid those, members of registries whose countries do not have the Agreement of “The most favored nation” with the People’s Republic of China. The decree 610 is repealed as on July 1, 2018 the Law on the "Ship Tonnage Tax" came into effect (presidential order No. 85).

In this regard, we must indicate that from ten (10) largest container traffic ports in the world the seven (7) are located in the People's Republic of China, these being: Shanghai, Shenzhen, Ningbo-Zhoushan, Guangzhou, Qingdao, Tianjin, Ningbo and Dalian.

Referring to the number and type of Panamanian flag vessels that arrive at the ports of the People's Republic of China, we have:

The principle of non-discrimination, for Panamanian-flagged vessels operating in the ports of China, is detached:

Regarding the air pollution derived from ships, in terms of sustainable maritime transport, also in matters related to ballast water management, we could take advantage of the decisive leadership of China established for decades to create a legal and technical scheme to generate a cleaner, greener and safer maritime transport, reiterating our global position as leader of the maritime industry.