Through the Panama Aquatic Resources Authority (ARAP) Panama is preparing for the evaluation to be carried out on June 19th by the General Directorate of Maritime Affairs and Fisheries of the European Union (DG Mare) with views to a positive and certified qualification and make sure there is no impediment to continue exporting Panamanian fishery and aquaculture products to the European market.

In June 2019, Panama was notified of the yellow card by this international body, which warned that if it continued without adequate controls, it could be identified as a non-cooperative country in the fight against illegal, unreported and unregulated (IUU) fishing, informed the administrator of the ARAP, Flor Torrijos.

Faced with the warning, the administrator affirmed: “we have agreed and developed an Action Plan with eight axes of action in the framework of an open dialogue with the European Union, including measures related to fleet control and traceability processes and to prevent us from the imposition of a red card and thereby prohibit the entry or imports from Panama of products from fishing, harming our producers.”

Among the actions developed, in this last year, there is the presentation of the General Law of Fisheries, aquaculture and related activities, the incorporation of the ARAP to the Single Maritime Window of Panama (VUMPA) to access the electronic information systems in all the national territory in order to know, in real time, the arrival of fishing vessels of foreign flag; A online system for issuing international fishing license issuance has been created, showing total transparency with users and increasing the fight against illegal fishing, and the total coverage of inspectors has been expanded to twenty-four hours a day, seven days a week.

In the last year, the Panama Aquatic Resources Authority signed a cooperation agreement with the International Organization of Global Fishing Watch, being one of the 4 countries that have taken this important step; surveillance with security forces has been reinforced to effectively control jurisdictional waters in order to prevent fish and other species illegally caught from reaching national and international markets. We have imposed sanctions to boats for illegal fishing that exceed one million dollars and the seizure of more than 57 thousand pounds of illegally caught products has been achieved.

In the fight against illegal fishing, the project of traceability of fish product has been launched to ensure the healthy consumption and end this IUU fishing practice that is carried out in all the oceans around the world and endangers the environment, the economy and health.

"Panama maintains a firm commitment to join the worldwide fight against Illegal, Unreported and Unregulated fishing, as it is the greatest threat to the sustainability of fishery resources in the short, medium and long term," said the ARAP administrator. 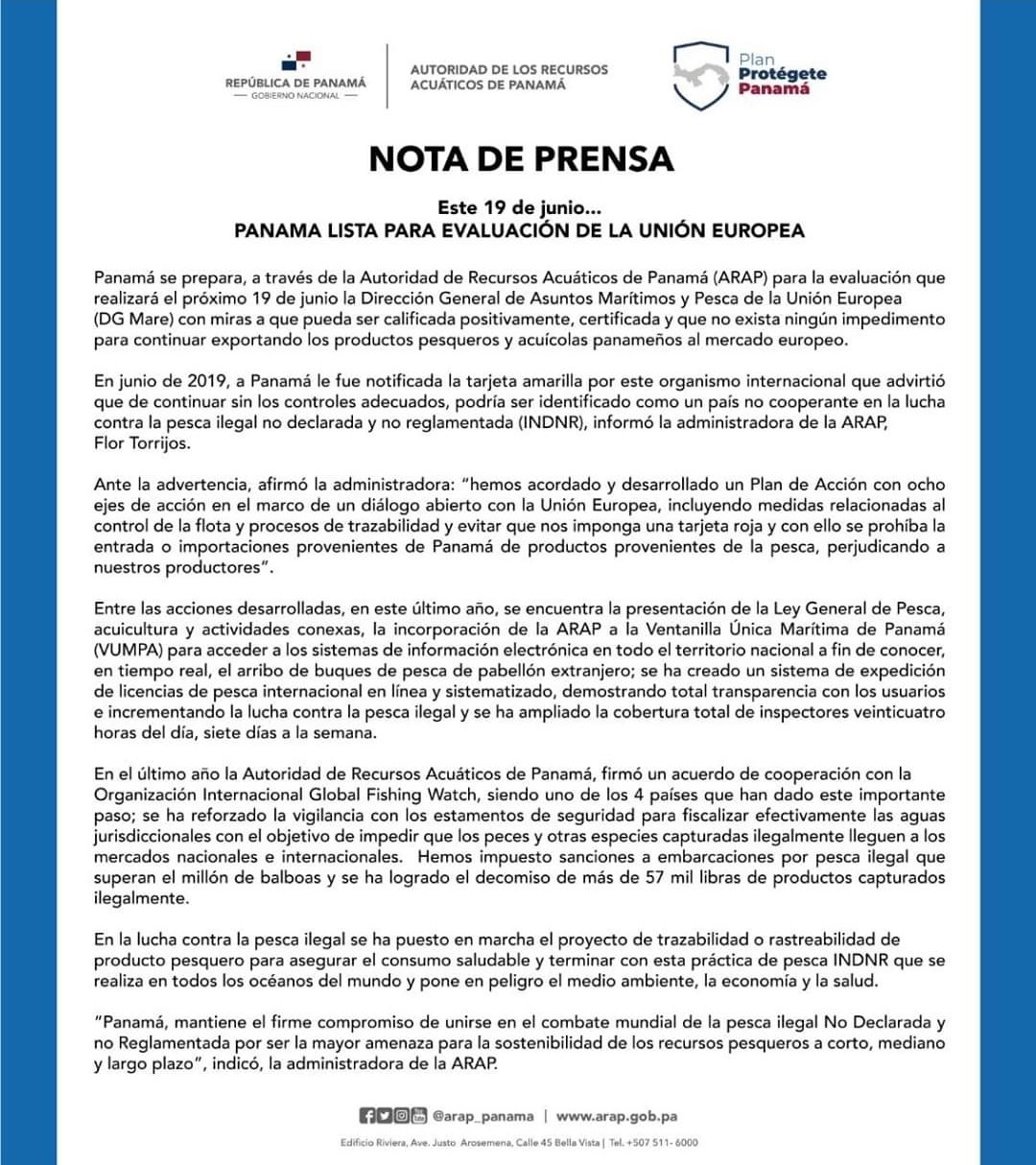